The main issues surrounding the Arctic region are the decline of glaciers and ice sheets, the decrease in coastal surface area and decline in sea ice.  In Greenland, due to major declines in ice sheets there will be numerous reductions in coast lines and low-lying areas.  This will cause many economic concerns, including but not limited to, population relocation.  Temperatures in this region have risen 1-4 degrees Celsius causing an average rise of 4-6m in sea level.  If Greenland’s ice sheets were to completely melt the increase in sea level would be 5m.  The average rise of the sea level can lead to many complications apart from population relocation, it can cause a reduction in freshwater rivers causing a shortage in freshwater.
Information taken from: http://www.ipcc.ch/publications_and_data/ar4/wg2/en/spmsspm-d.html

Climate change is casing many complications in the Arctic region.  It is expected that albedo will decrease; there will be a larger accumulation of carbon and methane causing permafrost to melt.  However, there have been models that show that in some parts of the Arctic there has been an increase in prosperity among wildlife and plants.  The impact that climate change will have on fisheries in the Arctic will both be harmful and beneficial.  It was noted that the decline in Arctic ice sheets have led to better marine access but detrimental effects to organisms dependent upon the ice sheets.  In the past few decades the average surface temperature of the Arctic has increased at almost double that of the global rate.  Warming in the Arctic is most extreme in the winter and the spring.  As a result of the decline in coastal ice sheets, there have been an increase in storms along the coast.
Information taken from: http://www.ipcc.ch/publications_and_data/ar4/wg2/en/ch15s15-2.html

The most interesting and detrimental threat to Greenland is the melting of the polar ice sheets.  This has a major impact on the sea level, as the ice sheets melt the average ocean level rises causing coastal flooding, which could severely impact communities in that area.   Apart from that, many organisms in Greenland rely on the ice sheets to maintain their livelihood.  Another major concern is the melting of permafrost which can create an unstable infrastructure, and also cause population relocation.  Also, with the decline of coastal areas, there is a threat of freshwater sources being contaminated, which could limit the amount of fresh water available to the region.  Many of these issues surrounding the melting of the ice sheets have significant economical complications. 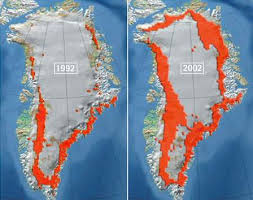 The image above illustrates the decline in ice sheets over the Greenland region from 1992 to 2002; this is a direct result of climate change. Although, this image might be a bit of an exaggeration of current conditions in Greenland, it nonetheless illustrates the impact the melting ice sheets have on the habitats of certain species in that area.
Posted by madan2 at 10:07 PM 1 comment:

A tornado is a fast rotating narrow area of low pressure that forms during strong thunderstorms.  The first part of the tornado is the vortex tube, which is rotating body of air on the ground; this is a direct result of vertical wind shear.  The air is then lifted off the ground from the updraft of the thunderstorm, once the air mass is almost vertical it is considered a mesocyclone; as the mesocyclone stretches the air mass starts to rotate faster.  Tornadoes usually travel from southwest to northeast because in the northern hemisphere because they are influenced by the prevailing wind direction, which also flows in that direction.  In the Unites States alone there is an average of 1,151 tornadoes.  In Greenland, however, there are no tornadoes; this is indicated in the map below by the lack of shading over the Greenland region.  Also, according to the map below, it is apparent that Greenland is not located in any global “hotspot” of tornado activity.  A good assumption as to why there has been an increase in tornadoes over the past 30 years could be attributed to global warming.  Tornadoes need atmospheric energy in order to develop and sustain itself; as the average temperature of the Earth increase the energy level as a result also increases, providing perfect conditions for tornadoes to develop more frequently.

In order for there to be hurricane formation there needs to be warm ocean temperatures to initiate evaporation, usually greater than 80 degrees Fahrenheit; a deep ocean layer of warm water so that when the wind stirs up the water the hurricane will still be maintained by warm water, and Coriolis to initiate the spinning of the hurricane.  Hurricanes that occur in the Atlantic or East Pacific are called hurricanes, hurricanes that occur in the Indian Ocean near Australia are called Cyclones and hurricanes that occur off the cost of China by Indonesia are called Typhoons.  The diagram below illustrates the different regions across the globe that is affected by hurricanes and their respective names.  In the U.S, hurricanes usually travel westward turning up North and then East this is because they are affected by the trade winds which also move from East to West.  In Greenland there are no hurricanes, as apparent in the map below.  This could be due to the fact that the water surrounding Greenland is below freezing and not warm enough to generate any hurricanes.  In the U.S there is an average of 5 hurricanes per every 3 years, that comes out to about 1.6 hurricanes every year.